She was expressly forbidden to go there. It was a place, her mother Mercedes warned, where winos went on occasion, and young lovers, frequently. One never knew what kind of mischief or carnal knowledge one might come upon or witness. When Senora Romero spoke like this--of the proximity of temptation or occasions of sin--she would finger the large gold medallion of the Sagrado Corazon that she wore around her neck and invoke protection for her oldest daughter from the phalanx of saints with which she was on a first name basis.

The image of the Sagrado Corazon was fortified on the reverse side with an engraving of the Virgen de Guadalupe, and Senora Romero wore the medal like the medieval armor of a crusader prepared to do battle with the infidel. It was a pose Alma saw her mother strike with frequency--inspired by the worldliness promoted by newspapers, television, popular music, protestantes, and errant in-laws.

She was not being disrespectful, Alma had convinced herself, when her mother would begin her pious sermons, to imagine Dona Mercedes, a fury on a rearing stallion--lance raised, mail clanking, banners aloft--routing unbelievers and sinners from the cantinas and alleyways of South Tucson, until they knelt trembling and repentant at the vestibule of Santa Cruz Church. Romero mistook Alma's dreamy unwavering stare for attentiveness, and so these periodic encounters left all parties satisfied.

Romero never behaved in any manner that would have called attention to herself decorum, simplicity, and moderation were the measures by which she lived her life and by which she ruled her family. It was easy enough for Alma to keep her afternoon sojourns secret from her mother. The excuses were varied and plentiful: In truth, there was never anything or anyone at school that attracted Alma's attention or detained her there. She was a solitary and thoughtful girl--dutiful in her studies, retiring in her behavior, guarded in her conversation--and so she went unnoticed by her teachers and ignored by the giggling groups of friends that gathered in animated knots in the halls, in the cafeteria, and on the school grounds. 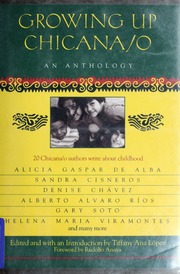 Alma seemed plain to the casual observer. Her dress was modest, almost dowdy, created from cheap fabric by the nimble fingers of her mother on her Singer treadle sewing machine. She wore no makeup or jewelry, in contrast to her peers at school: But it could be said that Alma had a certain beauty: Romero had long ago given up trying to tame Alma's unruly locks with ribbons and barrettes, abandoning these efforts to dedicate herself to other pursuits that were more pliable to her will.

Alma always made sure that she arrived home from school at a reasonable hour--in time to help with supper chores or to baby-sit her younger siblings if needed. Romero never questioned her tardiness or investigated, satisfied that the delay of an hour or sometimes two, was taken up with school activities.

Growing up Chicana/o : an anthology

A growing family, household duties, and spiritual obligations kept Sra. It contented her that there were no calls from the principal or teachers, and Alma's excellent grades were testament enough to her industriousness and trustworthiness.


Reprinted by permission of HarperCollins Publishers, Inc. Available now wherever books are sold.


Anaya All rights reserved by the original copyright owners. Excerpts are provided for display purposes only and may not be reproduced, reprinted or distributed without the written permission of the publisher. Make this your default list.

The following items were successfully added. There was an error while adding the following items. View or edit your browsing history. Get to Know Us. English Choose a language for shopping. Amazon Music Stream millions of songs. Amazon Drive Cloud storage from Amazon.